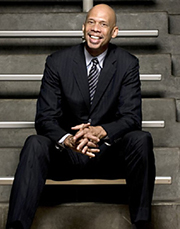 The 2011 key note speaker is Kareem Abdul-Jabbar. Abdul-Jabbar is considered by many fans and sportswriters to be the greatest basketball player of all time. The Basketball Hall of Fame center dominated the NBA winning six NBA Championships over the span of a twenty-year professional career. The NCAA has named him one of the top 100 scholar athletes of the century. ESPN has called him the "Greatest Collegiate Player of the 20th Century" and Time Magazine pronounced him "History's Greatest Player". His New York Times best seller, On the Shoulders of Giants, is in final production as a documentary film to be released in 500 theaters nationwide on February, 24, 2011. Abdul-Jabbar's philanthropic efforts reflect his passion to educate society and give back to the sport that has given him so much. In 2010, he founded the "Skyhook Foundation," a nonprofit that mentors aspiring youths from underserved communities, by combining sports and education programs.

For more information on Kareem Abdul-Jabbar and his community work, visit The Skyhook Foundation.

The Office of Government and Community Affairs is proud to announce the 2011 Community Leadership Awards. The purpose of these awards is to honor an individual and an organization whose contributions affect our community in a positive way.

The WSU Math Corps is a combined academic enrichment and mentoring program that brings middle and high school students from Detroit public schools together with college students to learn mathematics from each other, as well as to interact with professional mathematicians in a university setting. It is based on the dream of creating a self-perpetuating "corps" of students from middle school through college who excel academically, hold values that breed success in general, and who, through strong mentoring relationships, pass their knowledge and their values on to younger students, who in turn do the same.

Jeff DeBruyn is the President of the Corktown Residents' Council (CRC), a Partner and Founder of The Imagination Station of Roosevelt Park (facethestation.com). He serves as a Peacekeeper at Manna Community Meal soup kitchen, and is a staff member at Day House shelter for women and children in Corktown. Jeff has worked tirelessly to engage and serve the entire Corktown community. Under his leadership, the CRC's membership has increased 300%. Since taking a leadership role in Corktown, more than 25 blighted, seemingly intractable properties have become productive.

Inside Out Poets to Perform

InsideOut's Citywide Poets is an intensive after-school program for aspiring high school poets. For the past two years, three young poets received standing ovations as they performed their extraordinary poems crafted especially for the Dr. Martin Luther King, Jr. Tribute program (see video to the left). The Citywide Poets have won numerous awards including the prestigious Coming Up Taller Award given by the President's Committee on the Arts and Humanities. We are honored that they have accepted the invitation to once again perform at the Dr. Martin Luther King, Jr. Tribute.