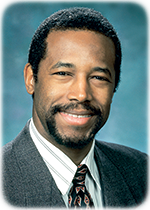 Some career highlights include the first and only successful separation of Siamese twins joined at the back of the head in 1987 and the first completely successful separation of type-2 vertical Siamese twins in 1997 in South Africa.  Today he is a full professor of neurosurgery, oncology, plastic surgery and pediatrics at the Johns Hopkins School of Medicine and is the director of pediatric neurosurgery at the Johns Hopkins Children's Center.

A recipient of numerous accolades, Carson was awarded the Presidential Medal of Freedom by the President, which is the highest civilian honor, in 2008, and was recognized by U.S. News & World Report and Harvard University's Center for Public Leadership as one of "America's Best Leaders."

In 2009, the movie Gifted Hands: The Ben Carson Story, starring Oscar winner Cuba Gooding, Jr., premiered on TNT and is based on his memoir.

Click here for more information on Benjamin Carson, M.D., and to learn about his Carson Scholars Fund, which recognizes young people of all backgrounds for exceptional academic and humanitarian accomplishments.

Net proceeds from the luncheon will support Adopt-a-Classroom. Last year WSU donated $10,000 to Adopt-a-Classroom. Adopt-a-Classroom is a nationally recognized organization that invites the community into classrooms to increase opportunity for student success by empowering teachers with community partnerships and funds to purchase resources for their classrooms. Wayne State University will form relationships with specific classrooms in our community and provide financial and moral support. We believe our efforts will result in a meaningful contribution to K-12 education in Detroit. Click here to see the classrooms we've helped.

Crossroads of Michigan is a social service outreach agency with two locations in Detroit. Founded in 1971, Crossroads exists to support the community at large by providing emergency assistance, advocacy, and counseling to anyone in need. Crossroads cares for any person in need by providing counseling, advocacy, and material assistance when possible and appropriate, and responding to other human needs in the community as they are able to do so.

Primarily a painter and sculptor, Tyree Guyton has also been described as an urban environmental artist. He has waged a personal war on urban blight on Detroit's East Side, transforming his neighborhood into a living indoor/outdoor art gallery. Guyton founded and created the Heidelberg Project, an open-air art environment in the heart of Detroit's East Side. Guyton uses everyday discarded objects to create a two-block area full of color, symbolism, and intrigue. Now in its 23rd year, the Heidelberg Project is recognized around the world as a demonstration of the power of creativity to transform lives.